A Land of Wild Colour

Many of Australia's Wildflowers are found in the outback and actually are very delicate yet despite this fact that they are also very hardy. However a lot of care has to be taken not to disturb the environment around them when you are out and about admiring them.

Some of the most unique wildflowers in the world are to be found in Australia. The usually dry outback with a little rain produces a vast array of colour where you can find petite colourful flowers under the shade and moisture of a rock and besides deserted billabongs.

In the tropics evergreen vegetation abounds sheltering orchids, tree ferns and other wildflowers of majestic beauty.

The Tropics and the Great Dividing Range

Approximately a quarter of Australia is situated above the Tropic of Capricorn, however much of this land is still semi-arid with seasonal monsoon rains dumping water on Australia's 'top end' during the summer months from late September thru to as late as March.

These monsoonal rains bring the Australian Outback to life and along the coastal fringes creates tropical rainforests, the Daintree National Park in Northern Queensland and Kakadu in the Northern Territoy being the most prominent and mostly visited.

They also help feed the Murray-Darling River systems in the east, and along with the regular winter rains along the southern eastern ranges waters the eastern coastal strip.

It is in these northern tropical fringes and south eastern highlands that a bountiful variety of bird life and plants and flowers can be found and after a few wet seasons is as green as anywhere on the planet. To drive through the Great Dividing Range and stop off at trickling clear rivers and find many different types of plant life is a wonderful adventure.

Much of the monsoonal rainwater flows south thru the parched arid centre of Australia, bringing life to birds, animals and plants along the way. During the monsoonal rains of 2008/2009 there were spectacular photos and videos of the water flowing into Lake Eyre, the most it had seen for more than a decade, scenes that were repeated during the 2010/2011 monsoonal season.

On both occasions birds were seen coming hundreds of miles to descend on the new feeding grounds created, with fish being brought to life along the reaches of the Georgina, Diamantina and Cooper Rivers in western Queensland south towards their destination at one of the largest salt lakes in the world, to Lake Eyre.

With these rains comes greenery that creates a contrast to the red earth of Australia's aptly called Red Centre. Yet the outback also provides wonderful widlflowers during even the driest seasons, along sheltered rocky waterways miles from anywhere, surrounded by the dusty dry earth of the Australian Central deserts. 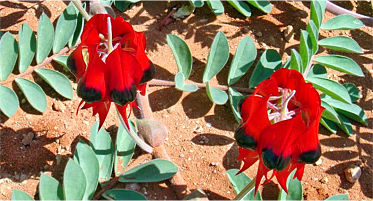 From its southern coastline to the Kimberleys in the states north WA is known around the world for its bountiful array of colourful wildflowers. Many 'easterners' cross the Nullabor to embark on a wildflower adventure and from the time they leave Port Augusta in South Australia's mid-north the search begins.

The best time for this display is from late July to mid November as the spring comes to life. There are an estimated 12,500 species of plant life, with many more still unlisted according to some botanists. Nearly sixty percent of these flowers are not found anywhere else in the world while others are sometimes a bizare twist on what are already known. Boronia, Heath, Banksia and Grevillia are just some of those that are unique in their Western Australian varieties. Then there is the unique and rare Wreath Flowers, an arrangement that looks like it was specially planted in a circular design. The rugged rocky landscape of the Kimberleys and Pilbarra which traps monsoonal rains fosters many outback gardens that remain mostly untouched except for the tourists eye. 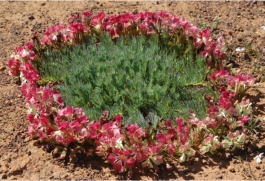 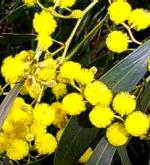 The Wattle tree explodes with very bright yellow flowers when in season. The Wattle has been exported to the northern hemisphere and is to be found in Britain, California and far as South Africa.

READ MORE ABOUT THE WATTLE: AUSTRALIA MY LAND.COM.AU 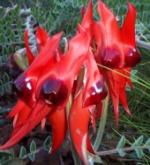 The Sturt's Desert Pea is a hardy beautiful and most interesting creeping vine.The plant has silky grey-green leaves and stems are covered with downy hairs. The flower or blossom is like a bean blossom, but much larger. The petals are deep bright or blood red colour with a glossy black swelling when in flower they really stand out.

READ MORE ABOUT THE DESERT PEA: AUSTRALIA MY LAND.COM.AU 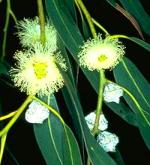 The leaves are a broad dark shining green covered with a blue-grey waxy bloom on square stems and are about 5 to 15 cm long. The cream coloured flowers have yellow centre and burst to life.

READ MORE ABOUT THE TASMANIAN BLUE GUM: AUSTRALIA MY LAND.COM.AU 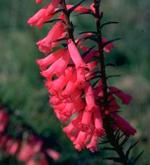 The Common Heath is a pretty and slender, upright shrub which grows to around a metre in height. It has many colour including pure white, pale pink, rose pink, crimson, scarlet and rare double flowered forms. The pink flower was the one chosen and proclaimed as Victoria's floral emblem.

READ MORE ABOUT THE COMMON HEATH: AUSTRALIA MY LAND.COM.AU 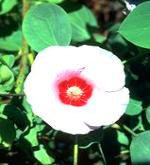 Sturts Desert Rose has been known by many names like the Australian Cotton, River Rose and Cotton Rosebush. It grows within rocks and slopes on rocky ground you will find it dry creek beds. The plant has dark green leaves often with black stipples with mauve petals with red bases forming a contrasting centre in each flower. It is to be found in the southern part of the Northern Territory. 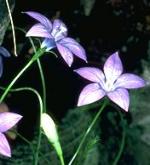 Royal Bluebell has violet blue flowers are up to 2-3 cm in diameter and have a pale centre with blue base of the petals combined with the purple style which ends in two white stigmas. The flowers may be erect or bent over and are on the end of long slender stems. It is a small perennial herb with oblong leaves.

READ MORE ABOUT THE ROYAL BLUEBELL: AUSTRALIA MY LAND.COM.AU 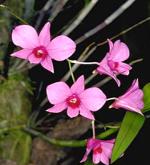 Cooktown Orchid are found in northern Queensland and used to grow in abundance around Cooktown but today is quite rare. The plant grows up to 80 cm in height and can have from 3 to 20 flowering canes up to 1.5 cm in diameter. The stems that hold the flowers are 10 to 40 cm long and can carry a number of flowers.

READ MORE ABOUT THE COOKTOWN ORCHID: AUSTRALIA MY LAND.COM.AU 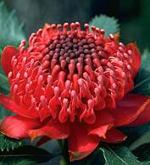 The Waratah could only be described as spectacular. The entire plant boasts boldness with it's bright crimson which can grow to 4 meters, it has dark green leathery leaves that often are toothed edged from 13 to 25 cm in length. The plant petals are really hundreds of individual flowers crowded together into a dense heads.

READ MORE ABOUT THE WARATAH: AUSTRALIA MY LAND.COM.AU 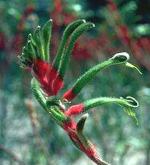 Red and Green Kangaroo Paw is aptly named as is similar to a real Kangaroo paw. The plant is a low growing evergreen shrub it has broad leaves that are about 30 to 60 cm long and taper to an acute apex.

The flowering stem grows to about a metre in height and the bases of the flowers are usually deep red and covered with woolly hairs.

READ MORE ABOUT THE KANGAROO PAW: AUSTRALIA MY LAND.COM.AU

Come and see a Land of Wild Colour